This classic car, when manufactured in 1946 the Triumph Roadster was the first made post-war by Standard after their acquisition of the respected Triumph name. Its design harked back to the classic tourers of the thirties, even featuring dickey seats, whereby two extra passengers could sit on folding seats in the boot or trunk, and even benefit from their own windshield. Young Frank Callaby designed it, on Sir John Black’s instructions. Walter Belgrove who designed the Pre-War Dolomites and the Post-War ‘Razor-Edge’ saloons was not involved and did not approve of the Roadster’s plump appearance! Frank Callaby and Arthur Ballard produced the engineering drawings. Though not a sports car, the car was acceptably fast in its day, managing a top speed approaching eighty miles an hour, though taking close to thirty seconds to reach sixty. 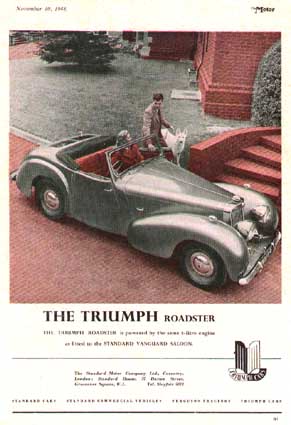 Above: Original ‘Motor’ advertisement for the Roadster 2000 in 1949. This model was the replacement for the ‘1800’ manufactured from 1946. The 1800 power unit was a fine 1776cc OHV four with a long stroke that had been used in the pre-war one-and-a-half litre Jaguars. The main structure of the car was mostly unchanged, apart from detail changes to the chassis to accommodate the new 2088cc engine, though some bemoaned the loss of a forward gear, in the style of American cars of the period. 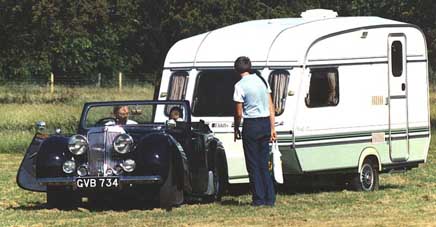 Above: demonstrating the power and flexibility of the Roadster engine, here towing a caravan. The engines have proved themselves on Swiss touring holidays, and versions of the 2000 Vanguard block powered the early Ferguson tractors and Triumph sports cars up to the TR4.

The Standard Vanguard wet liner unit was incredibly flexible, allowing one to drive off in top (third) gear with relative ease, should you miss a gear on the column change! This column mounted gearchange takes some getting used to, especially if the linkages are badly worn.

Above: picture of a Triumph Roadster when new.

Most of the bodywork is clad in ‘Birmabright’, an aluminium alloy produced for aircraft construction in the Second World War. Only the large pontoon style front wings are manufactured in steel, which was in short supply in those days.
At the end of its production run over 4000 of these fine machines had been built, of which a respectable number survive worldwide, most of which are owned by members of the Triumph Roadster Club of Great Britain.

My own car was restored for the second time from 2000–2004, having been partially restored and painted white some thirty years ago, soon after I bought it for £120 in 1969. This was on top of cream, which in turn was on top of the original ‘Lumina Green’, a soft metallic green which is a most elegant colour, though this wasn’t my choice for the more recent restoration. 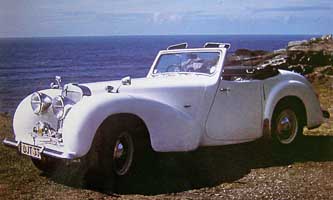 Mine is now metallic pewter grey, similar to one of the original colours. Triumph were at the forefront of metallic paint technology and continually experimenting with new effects, the other colours being ‘Champagne’, a pinky gold, and black, probably an essential option in those post-war austerity years. 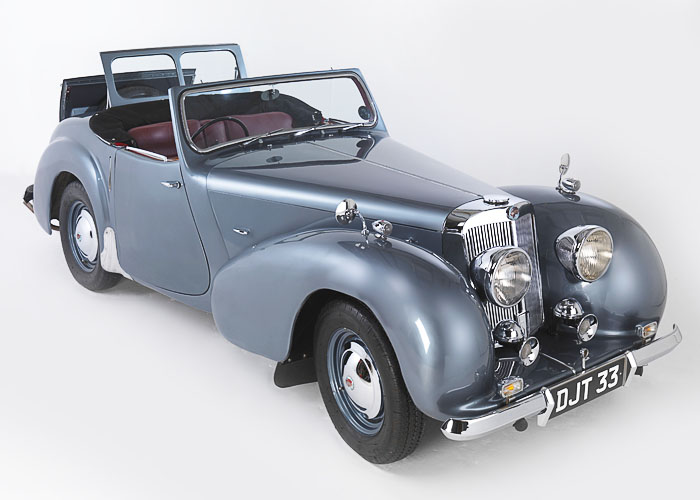 The carpets and leather in my car were originally pale green and the hood green also. The interior has been completely refurbished all in maroon.

Some of the ash frame was replaced, but as most of the bodywork is clad in ‘Birmabright’, an aluminium alloy produced for aircraft construction in the Second World War, there’s not much to rust. Only the large pontoon style front wings are manufactured in heavy gauge steel, which was in short supply in those days. The construction is a double skin of ally over an ash frame, not offering a great deal of protection in a rear shunt; worrying when you consider passengers could be occupying the dickey seats! 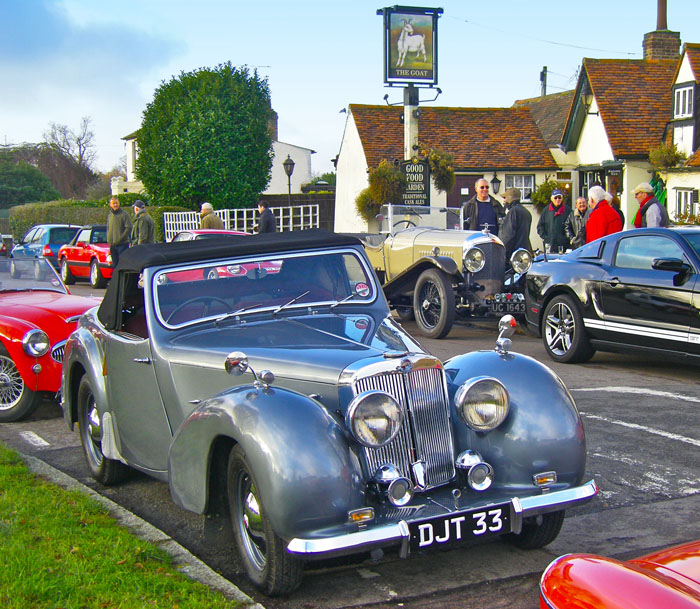 Above: Another view of the car, at a recent ‘Goat pub’ gathering, a regular meeting every first Sunday in the month at Hertford Heath.

Also find me on: